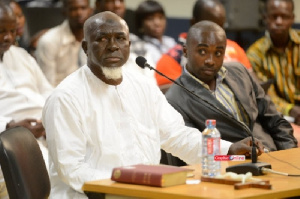 Veteran football administrator and owner of Premier League club King Faisa, Alhaji Karim Grunsah says the Ghana Football Association should pay his outift for the expenses incurred in their preparation towards their match week 15 fixture against Hearts of Oak at the Nana Ameyaw Park in Techiman. The game between King Faisal and Hearts of Oak schedule for today was called off after the GFA suspended football activities with immediate effect until further notice following a directive from President Akufo-Addo on Sunday evening. According to Alhaji Grusah, he initially advised the FA to suspend the league because of the outbreak of coronavirus and the FA refused, so if they had turn back to suspend the league after telling them to honor their week 15 game against Hearts of Oak, they should take care of their travel expenses and hotel bills. “I said it earlier that since most countries have suspended their leagues we should also do the same but they didn’t listen but once such a decision has been taken, we will accept it in good faith.” “But why would they have wait for us to travel to our match venues and pay hotel bills before they will come out with such a statement. Both Hearts and King Faisal travelled from Accra and Kumasi to Techiman for the game but we will send our petition to the GFA for them to forward it to the government for them to pay us back the money we have spent since the game didn’t come on,” Alhaji Grusah told the Kumasi based Nhyira FM.